Cupping has become one of the most sought-after therapies due to its excellent results. Cupping is a form of alternative medicine which uses cups to create suction and mobilise blood flow. It helps to promote the healing of a broad range of medical ailments. Cupping therapy is an excellent way to promote healing and alleviate pain. If you are looking for an alternative way to receive treatment, consider cupping therapy. 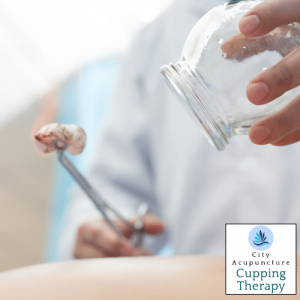 Cupping treatment has caught people's eyes in recent years. Since Olympic 2016, Olympic Champion- Michael Phelps and many other athletes have embraced this practice. American gymnast- Alexander Adour even claimed it is the secret he uses to keep him healthy. "It's been better than any money I've spent on anything else." Mr Adour added. (News 01)

What is Cupping Therapy?

Cupping is a form of alternative medicine. In which cups to create suction and mobilise blood flow. It has been used to promote the healing a broad range of medical ailments. Due to their excellent results, Chinese-style fire and wet cupping have become one of the most sought-after therapies. The cups can be made of a variety of materials, including:

The ancient Egyptians, Chinese, and Middle Eastern used such therapy. Traditional Chinese medicine has embraced such a therapeutic method into the Chinese medicine system. They believe the cupping treatment will promote free-flowing of Qi (energy). Over thousands of years, they developed further to combine cupping with topical herbal medicine and acupuncture points. These integrated modalities can treat various illnesses, such as pain, skin diseases and internal disorders. 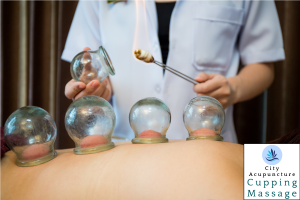 There are various types of suction cups for different conditions, including:

A flammable substance such as alcohol, herbs, or the paper is placed in a cup and on fire. Then the therapist puts the cup on top of the flame. As the fire goes out, the cup is placed upside down on the patient's skin.

As the air inside the cup cools, it creates a vacuum. This suction causes the skin to rise and redden as blood vessels expand. The cup is generally left in place for 15 to 20 minutes. 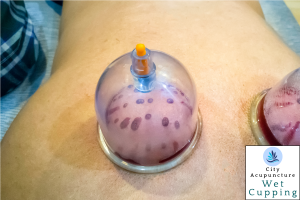 What is Wet Cupping?

A mild suction is created during wet cupping using a cup on the skin for about five minutes. Then the cup is removed, and a small scalpel makes superficial skin incisions. A second suction was performed to draw out a small amount of blood.

After the procedure, an antibiotic ointment will cover the site to prevent infection. The skin's appearance generally returns to normal within 7-10 days. Wet cupping removes harmful substances and toxins from the body to promote healing.

What are the benefits of cupping 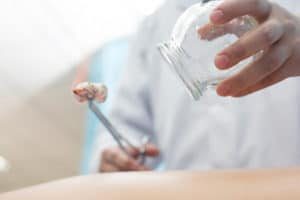 Is there any side effect?

It is a very safe treatment. However, most people will have cupping marks for a few days. The reason that people have those marks is the process of natural healing. Cupping therapy may help to remove the stagnation of blood circulation. Bring the deoxygenated blood to the skin surface by suction. Some people might even find the colour of the marks become lighter after a few cupping sessions. It could indicate that the pathogens are systematically removed from the body.

What should I expect from your clinic?

Cupping therapy is an ancient, safe, drug-free, natural procedure for many health conditions. We use a modern version of cupping with a rubber pump to create the suction. Sometimes we may use medical-grade silicone cups. These are pliable enough to be moved from place to place on the skin and produce a massage-like effect. Suppose you wish to learn more about why so many sports professionals, such as Michael Phelps, use it. We are here to help.

How Can We Help

Since 1996, we have led the effort to promote painless acupuncture as a safe and effective natural treatment to tens of thousands of Australian.

City Acupuncture Pain Clinic offers gentle but powerful laser and traditional acupuncture and Chinese medicine treatment in Adelaide CBD. All health funds recognise our registered acupuncturists and Chinese medicine practitioners. Therefore, rebate claims are very efficient and straightforward through HICAPS facilities onsite. In your first visit, we start working with preliminary examinations such as pulse taking, tongue checking, physical palpation, and assessment. Then we will collect all related information about your diet, overall lifestyle, exposure to toxins, hereditary factors and medications. Consequently, by working with both the symptoms and cause, we will form a treatment plan for your approval and treatments to follow. Doing so can provide the most personalised therapy with minimal side effects.

The Laser Acupuncture Adelaide's treatments are painless and non-invasive; they will not affect your daily lifestyle during the treatment plan. Your acupuncture treatment may combine with other alternative medicine, such as Chinese herbs, Tui-Na massage, cupping and laser acupuncture. It can also integrate with your other routine care and prescription medications.

Our acupuncture treatments are based on clinical evidence and will also improve your general health. Balancing the lifestyle and reducing stress can help you feel and function better.

Our mission is to help you enjoyably regain your health. Thus, we will work with you to find the best treatment solution for your healthcare needs, achieving quick and lasting pain relief. Furthermore, We are conveniently located in the CBD and easily accessible through private and public transport. Email or Call Us at (08) 8221 5880 now to learn more about our excellence in acupuncture and Chinese medicine, or schedule your consultation online today.